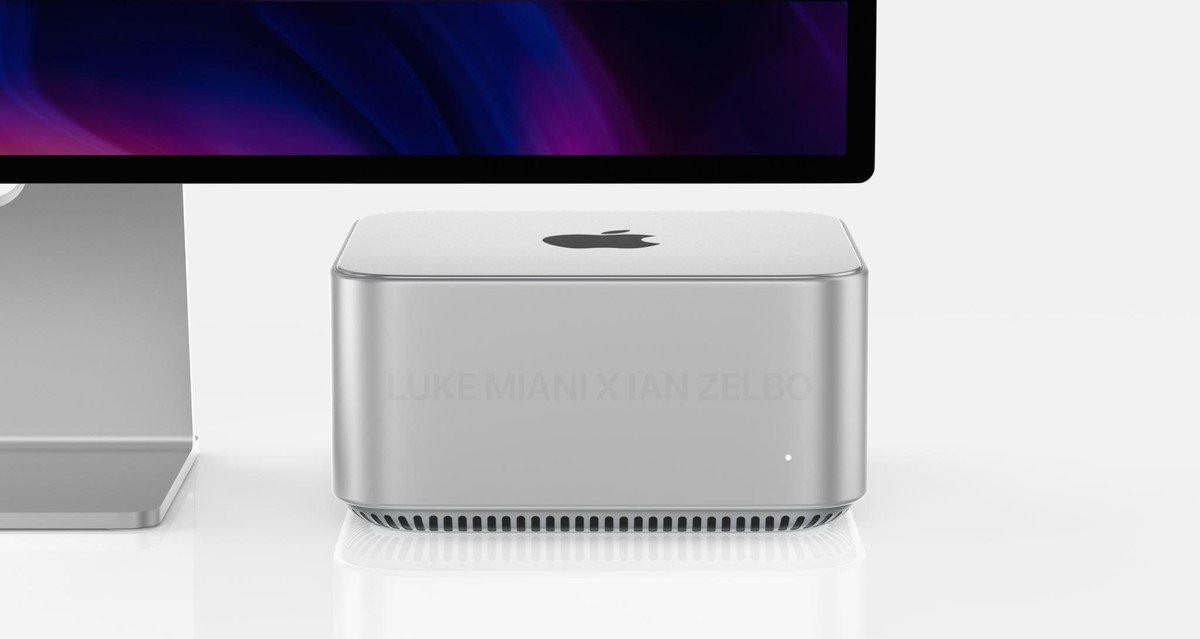 Published March 9, 2022 by techbuyguide
Techbuyguide.com is reader-supported. When you buy through links on our site, we may earn an affiliate commission.

Apple has unveiled its first hardware news for this year. Alongside the revamped iPad Air tablet, we’re getting an all-new Mac Studio compact computer that combines compact size and high performance. Apple will also offer a new display to go with it.

Even though Apple leaked a lot of news from its first conference this year to the internet in advance, the company still managed to surprise us. It’s adding a new product, the Mac Studio desktop, which combines the compact size we’d expect from the Mac Mini with the extreme performance of the Mac Pro. The only thing that didn’t surprise us was that, again, it’s not cheap at all.

While the new Mac Studio isn’t quite as small as the Mac Mini, it’s still much smaller than a typical desktop computer. The body of the device is nicely minimalist, with a unique cooling system. The computer draws air in along its entire bottom edge, then lets it out through the rear exhale. The body of the Mac Studio is a typical silver colour, made of aluminium.

At the heart of this computer are the modern Apple M1 Max processors, and for the more demanding, there’s the new Apple M1 Ultra. While we’ve already met the Apple M1 Max in the Macbook Pro, the Ultra version makes its debut in the upcoming Mac Studio. And it’s also the most powerful in-house chip to date. Technically speaking, it’s two M1 Max chips working together at the same time, but in terms of performance, the novelty will have any previous Apple computer for breakfast.

If you get the M1 Ultra, for example, you get 90% more performance than a Mac Pro with a 16-core Intel Xeon processor. The M1 Ultra chip itself offers 20 cores, which are divided into 16 performance and 4 power-saving cores. The graphics chip has 48 cores, and it also features a machine learning processor with 32 cores.

Connectivity options include a total of six Thunderbolt 4 ports (four in the back, two in the front), two USB-A, 10Gb Ethernet, HDMI, a headphone jack, and an SDXC memory card reader. The base operating memory (RAM) for the M1 Max model is 32GB and can be increased to 64GB, while the M1 Ultra model’s RAM has 64GB, with an option to increase to breathtaking 128GB. The base SSD data storage is 512GB, and again very large (we’re still talking SSD) 1TB for the Ultra. Both models can be purchased with up to 8TB SSD in total.

How much does the Mac Studio cost?

Sales start on March 18, you can pre-order now with some deliveries of the M1 Ultra variant to be fulfilled from the beginning of April in the UK (depending on the order and postcode) and in the mid/end of March in the US.

Apple has unveiled another desktop addition to the Mac Studio desktop, the Studio Display. The Studio display has a 27-inches diagonal, featuring a 5K resolution (5,120×2,880 pixels) and a Retina panel with TrueTone support. The display also features a 12Mpix wide-angle camera for video calling. There are four USB-C ports on the display, one of Thunderbolt 3 type.

The Studio Display costs £1,499.00, with a choice of a standalone screen or a standard stand included. However, the height-adjustable stand will add an additional £400 to the bill. The monitor can also be purchased in a variant with nanotextured glass, which reduces light glare. The version with nanotextured glass costs £1749.

The monitor can be pre-ordered now and will arrive on the market on March 18.

The last news besides the new small iPhone is the new iPad Air fifth-generation tablet. As with the new budget iPhone SE, the changes have taken place mainly inside the body. The design is identical to the previous version. Likewise, everything has remained the same in the case of the display, the rear camera and the battery.

The main novelty is the presence of the Apple M1 chip, which can be found, for example, in the powerful iPad Pro tablets. This chip is supposed to be up to half as fast as Apple’s A15 Bionic mobile processor (currently used in modern iPhones). The Apple M1 is equipped with eight cores for both CPU and GPU. There are also 16 cores for machine learning (Neural Engine).

Again, the device works with the Apple Pencil and a host of other accessories, such as a keyboard. These again connect via the Smart Connector on the back of the tablet. This time, you’ll also find a physical USB-C or a quad of speakers. New, however, is support for 5G networks, so that even outside of wi-fi networks you can access fast data transfer.

The iPad Air 2022 price and configurations

As with all other introduced devices, the new iPad Air 2022 will go on sale on March 18.