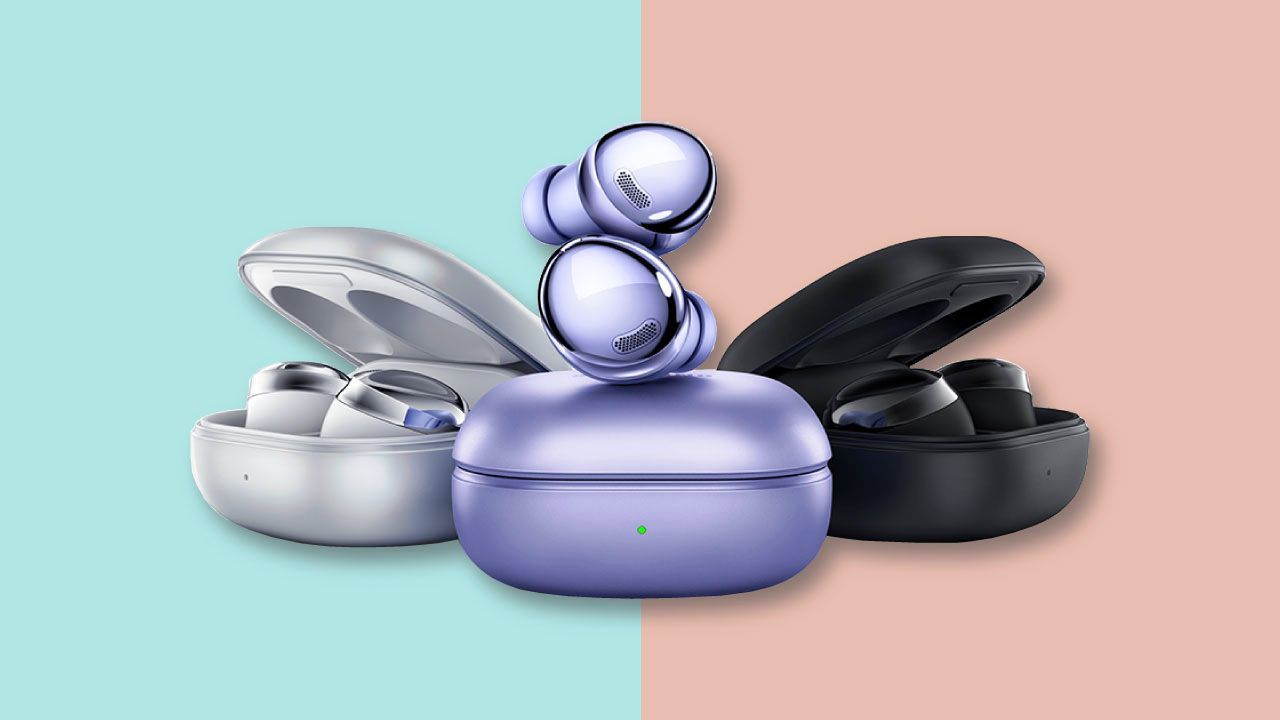 Published January 17, 2021 by techbuyguide
Techbuyguide.com is reader-supported. When you buy through links on our site, we may earn an affiliate commission.

When it comes to wireless earbuds, Samsung is relatively tireless in its development. The last time he surprised us with the unconventional kidney bean-shaped Galaxy Buds Live headphones last summer, now he is returning to the “classic” in-ear design with their newly introduced Galaxy Buds Pro.

It is currently the top model of Samsung’s portfolio in the wearables category, which is about to please with many interesting features.

As mentioned above and seen in one of the previous leaks, the kidney bean-shaped style of the previous Galaxy Buds Live has been ditched and Samsung went back to the standard, rounded shape.

The Galaxy Buds Pro come in three different colours (Phantom) Violet, Silver and Black to match with the colours of the newly introduced Samsung Galaxy S21.

As reported earlier on the earbuds indeed got an improved water resistance. Opposite to IPX2-rated Buds Live and Buds Plus, the Galaxy Buds Pro got IPX7 protection, which basically means upgrade from water drips resistance to being able to survive being sunk a 1-metre depth of water for half an hour.

Some major tech journals also believe that Samsung could launch the Galaxy Buds Pro Live (2) this year with the bean-shaped design.

The square-shaped case got a solid structure with a battery life status in the form of 3 LED lights (green, yellow, red) on the front of the case. You will find charging USB-C port on the back. The charging can also be done wirelessly simply by placing the case on the Qi pad.

Galaxy Buds Pro size is relatively tiny, each of the earbuds weighs only 6.3 grams and in a cone-like shape finished with a rubber extension. The outer surface of both earbuds is used for touch control.

Inside of each earpiece, there are two-band drivers – 11mm woofer and 6.5mm tweeter which should improve (opposite to single driver) the sound’s frequency range. Samsung promises high-quality sound, which also supports the active noise cancelling. Each of the earbuds has three microphones, one inside and two outside connected to a special voice recording unit. The earbuds can either completely (Samsung claims for up to 99%) eliminate ambient noise, or activate the ambient mode, which plays the surrounding events directly into the headphones.

This means that the earbuds detect when you are talking or a car is passing during your exercising and can automatically switch to an ambient mode. This also works well when moving from quiet to a noisy area where the earbuds will automatically adjust the noise cancellation according to the outer environment.

Thanks to the mentioned voice recording unit, you should hear yourself as if you had no earbuds in your ears as the Intelligent Active Noise Control recognizes your voice when start talking and will automatically turn your music down during your conversation and bring it back up when you finish the conversation. To this, a rather convenient is a skip-back function which allows you to replay the previous part of your favourite song in case you missed it.

In addition, you can look forward to good quality calls thanks to accelerometer and three microphones improving the audio quality, for example, during windy weather conditions.

For many, the battery life is a crucial fact during their decision making. The Galaxy Buds Pro are really not doing bad in this matter but they are not the longest-lasting at the current market. The 60mAh battery in earbuds will give you around 5 hours of playback time with an additional 13 hours from 472mAh battery in the case. With the ANC being on, the earbuds will give you approximate playback of 11 hours on a single charge, which will still get most of us through the day.

The Samsung Galaxy Buds Pro support fast charging with which you get an hour of playback after charging for only five minutes. You can use the fast charging simply via the USB-C port.

The Galaxy Pro feature Bluetooth 5 connectivity and are well optimized to use with the Samsung products, thanks to its Auto Switch feature, which allows you to switch between multiple Galaxy Products. For instance, while you playing a game or listening to music on your Galaxy Tab 7+ you can switch to your Galaxy S21 phone to receive a phone call. They can also be set up, that they switch automatically for the phone calls and switch back when you hang up.

You can buy the new Samsung Galaxy Buds pro from most of the high street retailers, as well as from Amazon or AO.com.

Even though the Samsung Galaxy Buds Pro come a bit pricier than the previous models, you will get a lot out of them. They boast of many features, an advanced Active Noise Control, fast and wireless charging, 360 Dolby audio and good compatibility with Samsung Galaxy products. The compact design also gives them a certain distinction from other wireless earbuds.

We might still have to wait for further audio quality reviews when they are available to buy, but after the success of the previous Samsung’s Buds Plus and Live, there shouldn’t be any setbacks to the audio and the overall experience mostly thanks to the technology used here.