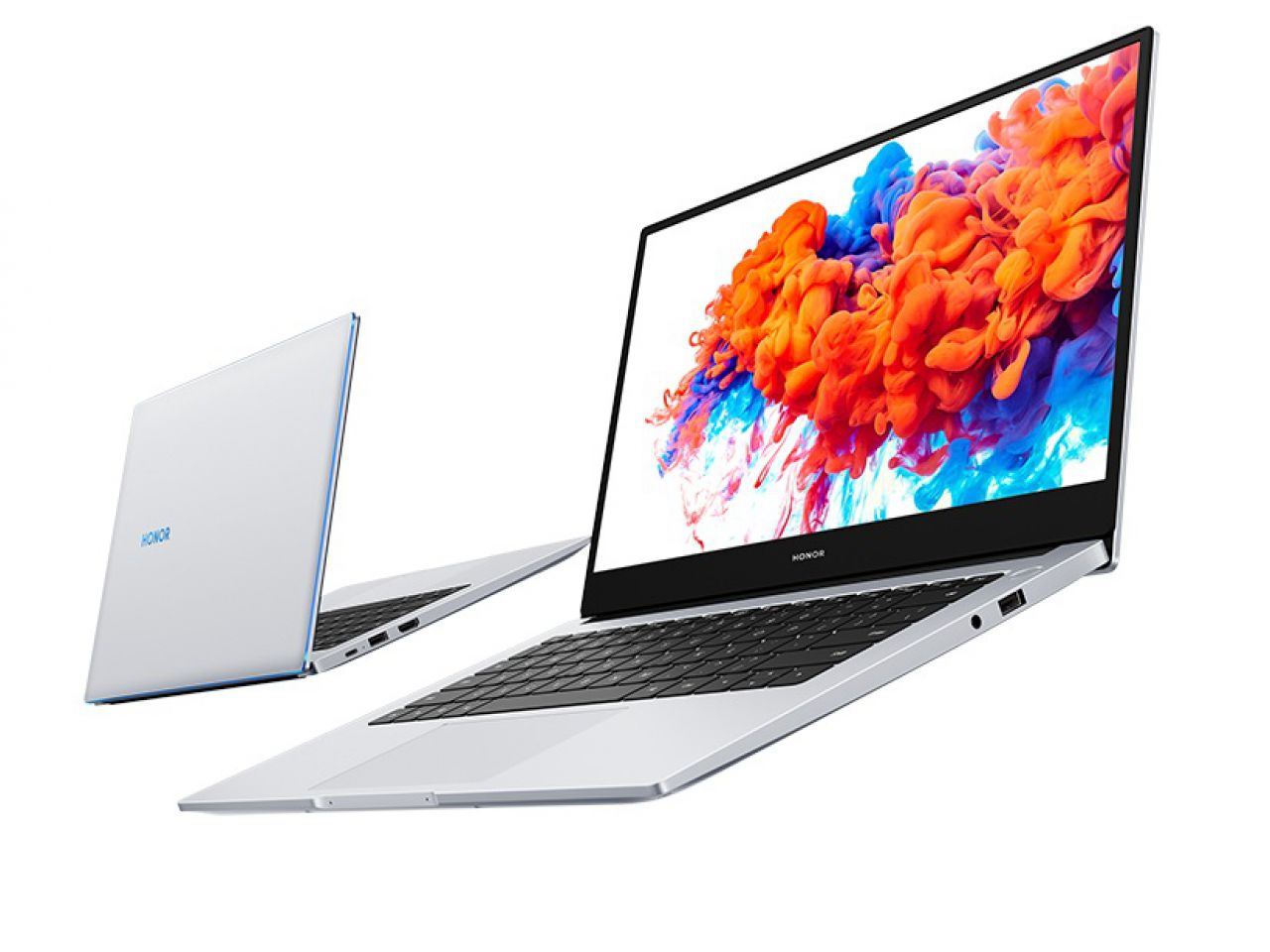 The Honor brand is usually associated with mobile phones. The company owned by the giant Huawei started with them, but thanks to the success it soon started to manufacture a wider spectrum of products. We have seen an Honor Smart Watch on the market for some time now as well as earphones, and now above all also a MagicBook laptop.

There are currently 3 different models of the Honor MagicBook on UK market which differ in the screen resolution and with Pro Model also in RAM and Processor.

After unpacking from the box, the computer gives a good impression (both visual and physical), which is mainly due to the materials used. The main role in the chassis of this computer is played by aluminium alloy.

The MagicBook looks very solid. In addition, the designers chose a good looking matte variant of the surface treatment, which is not prone to fingerprints. Only the Honor brand logo is engraved and glossy.

Although the Honor MagicBook is not one of the thinnest on the market, it looks very compact and is ideal to be carried in a backpack. Thanks to its ‘metal’ construction, it is a bit heavier than it might seem at first glance, but it is definitely not a heavy-duty machine. With a weight of 1.4 kilos, it is one of the lighter ones on the market.

Connectivity – only the necessities

From the connector equipment, the MagicBook really collected only the essentials.

The computer has one USB-A port on each side. The right one is then supplemented with a 3.5 jack input/output and the left one with an HDMI port and a USB-C port.

The USB-C port is also used for charging. The charging is taken care of by a powerful 65W charger.

In terms of design and compactness, we must also praise the charger itself, which is very compact and thanks to the cable with USB-C connectors at both ends, it is very practical and multi-purpose.

The ports are modest at first glance and lack, for example, a classic LAN connector. However, the purchase of a docking station that can communicate with a computer very quickly thanks to USB-C can solve this problem. Unfortunately, the USB-C port lacks support for the graphics card so the only way how to connect an external screen to the laptop is via an HDMI cable.

There aren’t many surprises (other than one!) after opening the laptop. At the bottom of the laptop, there is a relatively large touchpad. Unfortunately, the buttons are missing, so it is necessary to use familiar gestures to control them – one finger left mouse button, two fingers right mouse button. The touchpad also works as a large button, which gives you a bit more confidence when pressed. The keyboard above the touchpad does not have a separate numeric part, so the keys can be pleasantly large and ideally fit “under your fingers”.

In addition, the keyboard hides one surprise.

At the top part of the keyboard, between the F6 and F7 keys, there is a key with a webcam icon, which is not just a key but the entire 720P HD webcam which pops out of the keyboard when pressed (same as in Huawei Matebook X Pro). This is an interesting solution to allow the users to have the camera covered to protect their privacy and use it only when really needed.

From its position under the monitor, however, the camera always captures the user from below, which may not suit everyone.

On the side of the MagicBook, next to the keyboard, there is a power button, which also works as a fingerprint reader. The computer responds to logging in with the reader very quickly and accurately, and we quickly got used to using it instead of typing the login password during the test.

With its hardware equipment (and price tag), the Honor MagicBook is aimed at the middle class of today’s laptops. Its creators bet on multimedia and office use rather than a high performance for games or advanced video editing.

We commend the used IPS LCD monitor. It offers maximum FullHD resolution with 90% Screen-to-body ratio and excellent colour rendering. The viewing angles of the display are also very good, which will be appreciated especially by multiple users looking at the same screen. In this case, the screen can be opened to almost horizontal level with the keyboard. Unfortunately, advanced features such as higher display frequencies or HDR support are not available. The computer also performs very well in terms of sound. The built-in speakers perform well for normal music or movie playback.

In the matter of processor and graphics, Honor has invested in a partnership with AMD. The heart of the MagicBook is the Ryzen 5 3500U with an integrated graphics card Radeon Vega 8. This processor is comparable in performance to the current generation of Intel i5. For office computers and simpler or older games, the Honor MagicBook is enough, but for those, who are looking for a high-performance gaming laptop, we recommend looking elsewhere.

For hardware specifications, we can not omit the SSD with a capacity of 256GB, which is basically divided into two partitions. For normal use, this capacity is quite sufficient and can always be expanded with an external drive. SSD technology allows the system to load very quickly, so it takes just a couple of second to get back to your work after opening the laptop.

In most of the UK’s retailers, it is possible to only buy a lower-spec version of the Honor MagicBook laptop, even though you may find some exceptions. The higher-spec version comes with 512GB SSD Memory and better processor AMD Ryzen 5 4500U and 16GB RAM in Pro version. The difference between then is around £170. You can buy the better version for example from official hihonor.com website.

Because the Honor MagicBook is aimed primarily at active users who want to take full advantage of its mobility, its key feature is battery life. It lasts for 8 hours of office work or approximately 6 hours of watching movies and listening to music. Thanks to the powerful charger, the battery gets back to 50% relatively quickly (in about 35 minutes).

The MagicBook will have a special charm for Honor phone users. Company Honor (Huawei) has prepared a MagicLink function for them, which by combining an NFC chip, Bluetooth and WiFi connection enables fast communication between a mobile phone and the laptop.

The connection itself works very fast and there is no need to enter any complicated codes or settings. Just place the phone in the place marked with the sticker and have all the above-mentioned communication protocols connected.

Honor MagicBook could be tagged is an honest modern laptop. It has a successful compact design and, thanks to the metal body, also increased durability. This makes it a good working tool for school or travel. With its performance, it belongs to the middle class of ordinary work and multimedia laptops and manages its role very well in this area.

It is also important to praise the computer display, which has very good viewing angles and color rendering, a fast and accurate fingerprint reader and average to long battery life complemented by a fast charging function. On the contrary, it is a pity that the computer does not fully use the potential of the connection via the USB-C port.

For the price tag of £499 for lower spec and £669 (£849 for Pro version) for the higher-spec version, it is an outstanding laptop for a wide audience and should suffice for your daily tasks.

There is a £70 discount deal on the official hihonor.com website on MagicBook 15 and MagicBook Pro laptops from 1.11. – 30. 11. . You will also be able to choose one of free gifts: HONOR Mouse OR HONOR Backpack OR HONOR Bluetooth Earphones (Pro version only).