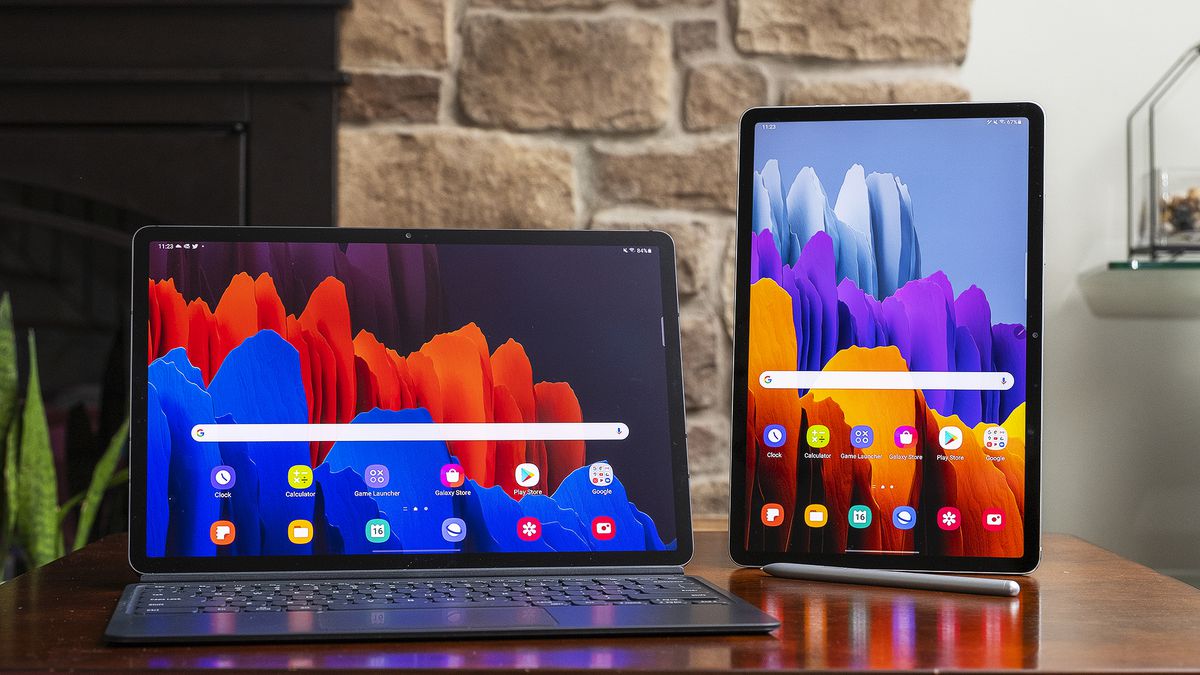 Published November 3, 2020 by techbuyguide
Techbuyguide.com is reader-supported. When you buy through links on our site, we may earn an affiliate commission.

The Galaxy Tab S7 + is the successor to Samsung’s successful product line. As such, it offers the most premium equipment, uncompromising performance and quality workmanship. The construction creates an elegant and high-quality impression.

The dominant feature of the front is a 12.4-inch AMOLED display with a resolution of 2,800 x 1,752 pixels. Advanced display technology ensures high colour quality and a good contrast ratio. The resolution on said diagonal gives a total of 266 pixels per inch, making the tablet on average to above average fine in terms of display. The dominant feature of this model is the high refresh rate of the display, which reached 120 hertz. Thanks to this, the movement on the screen will be very smooth and the operation will also be predestined for playing games.

The battery capacity is 8,000 mAh, which is itself a relatively high value. More important, however, is the 15-hour endurance that the manufacturer states for playing videos without WiFi running. However, in real use, this value can vary significantly. The battery can be charged via the USB-C connector.

The manufacturer did not skimp on performance and put the most powerful processor for Android, which was available on the market in October 2020, into the tablet. It is an eight-core Snapdragon 865+ processor with a maximum frequency of 3.09 GHz.

Thanks to 6GB of RAM and Adreno 650 graphics chip smooth operation of the most demanding applications and games is ensured, for which this tablet is also completely suitable. The storage capacity is basically 128 GB, however, as with other Samsung tablets, they can be easily expanded with an SD card, up to 1024 GB. Such a high value is already very difficult to fill.

The dual camera is better quality than the cheaper models, but what still applies to all tablets is not to expect taking any high quality photos. As a result, however, it doesn’t matter, because almost no one really takes a picture of the tablet and the manufacturers know it, si it becomes more or less just a ‘nice feature to have’ as shooting with such a large device is uncomfortable. The main camera then has a resolution of 13 MPx and is sufficient for recording purposes.

An S-Pen stylus is available for more precise control and graphic work. The tablet is also equipped with a module for navigation via GPS, Glonass and Beidou systems.

The Samsung Galaxy Tab S7+ also supports Wi-Fi 6, Bluetooth 5, USB-C 3.2 and features optical fingerprint reader under the display. It lacks an NFC module which in case of tablets is not really a deal-breaker. What might some of us miss, though, is a lack of IP certification to protect the tablet from water or dust particles while using the tablet for instance in the kitchen or on the beach.

The fingerprint scanner is fast and quite reliable, but face recognition sensor is even faster. On the shorter sides of the tablet, we can find four stereo speakers tuned by AKG with the support of Dolby Atmos, which play loud enough.

Unfortunately, the 3.5 mm jack is missing and you will not find a reduction in the package either so only option is to use headphones with Bluetooth support. At the bottom side, you will find pins for connecting the keyboard there.

Galaxy Tab S7+ in its most expensive version also offers a 5G support.

A new functionality called Sharing Nearby, which is Google’s response to AirDrop is also available. If you need to move a file or photo between your phone and tablet, you can use Nearby Sharing, but during testing, Samsung Flow turned out to be faster. However, once the AirDrop alternative is extended to devices other than Samsung and Google, it will certainly be more usable.

The main weapons of the Galaxy Tabu S7 +, the DeX and S Pen interface, certainly deserve a separate chapter.

DeX mode is nothing new – it is a modified environment that resembles a classic desktop solution. In the case of the Galaxy Tabu S7 +, you can launch this with one click, or after connecting an external keyboard.

Just the transition to the new interface could be faster – after the invocation, it takes about 8 seconds for the environment to get ready for work.

DeX is no longer dependent on an external dock with a possibility of direct mirroring to a supported TV. After connecting the USB-C cable, it is also possible to connect to the monitor.

The choice between different android environments is probably the biggest advantage of the DeX interface. This solution is much better for working with multiple windows, as well as everyone who does not like the style of an inflated phone. Speed, fluency and clarity in conjunction with the keyboard and mouse will certainly replace the notebook, especially for less demanding users. It’s just a pity that not all applications currently count on this interface.

Even with all-day use, we weren’t able to discharge the battery in the stylus to zero, and even if you succeed, just attach the S Pen to the wireless charging on the back of the tablet.

The battery boasts a capacity of 10,090 mAh, which may seem like a giant portion, however, in the premium tablet segment, this is an average value. Compared to the previous model, however, the battery has grown, which is only good. There are no dizzying problems with endurance – it manages to last comfortably on a normal working day and it still has about 40% left. Playing hour-long video at maximum brightness at maximum resolution has drained the battery by some 8 percent. The manufacturer promises a battery life of up to 14 hours on a single charge, depending on usage.

Charging is a bit tricky here. The included 15W charger meets the certification for fast charging, but you can still wait a few hours to get onto a full charge from 0 to 100%.

In the first half an hour, the battery gets charged at 18% of its capacity, and due to its large size you can’t count on the same charging speeds as with smartphones. The tablet also supports 45W charging, so if you’re in a hurry to recharge your energy, you can invest in an additional charger that supports this output.

The Samsung Galaxy Tab S7 + attacks the imaginary pinnacle of professional tablets currently occupying the iPad Pro. Shall you seek something a bit more affordable then the iPad Pro, this might be the right choice.

Needless to say, that the new Samsung Galaxy Tab S7+ will not definitely be ashamed of its functions and equipment. The display is simply phenomenal, having great performance managing very demanding applications with ease and nice, intuitive UI. Add to that the ever-improving DeX and the great S Pen is in the package as well.

If you are considering a tablet not only to browse through social media and for watching movies but also to get some work done, the Samsung Galaxy Tab S7 + is currently the best you can get with the Android operating system.